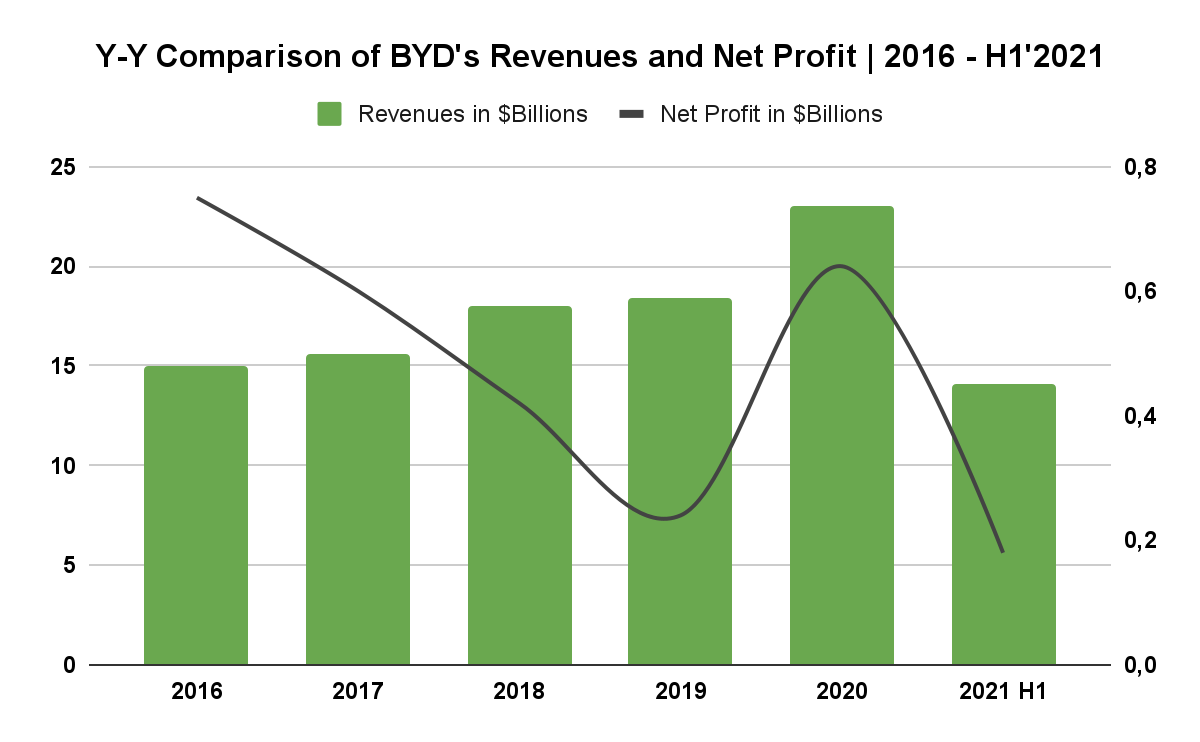 Regarding the fall in net profit, BYD explained in its 2021 semi-annual report that due to changes in product structure, the company’s gross profit margin declined; at the same time, the company’s overall profitability was affected to a certain extent by the rise in raw materials, such as bulk commodities. The company’s gross profit margin decreased from approximately 18.05% in the first half of 2020 to approximately 11.13% during the first half of 2021.

Among BYD’s various business sectors, the fastest runners in the first half of this year were neither the cars nor the batteries, but the mobile phone components and assembly. Compared with the same period last year, the share of the automotive business in total company’s revenues decreased from 53.01% to 43.08%, and the revenue share of mobile phone components and assembly increased from 38.64% to 47.5%. In other words, it is not the automobile business that drives the company’s revenue growth, but the mobile phone assembly business.

It is understood that the raw material costs of the battery business have risen, the proportion of the thin-profit assembly business in the mobile phone components has also increased, and the medical protective equipment business (masks) that increased profits last year has narrowed down sharply.

However, neither of these factors can adequately explain the continuous downward trend of BYD’s gross profit in its main businesses, i.e. automotive, rechargeable batteries, and mobile phone components. Whether these downward trends are emerging from temporary factors, changes in the company’s production capacity, excessive reliance on subsidies, intensified competition, or more structural causes regarding BYD’s overall productive chain, it remains to be seen. 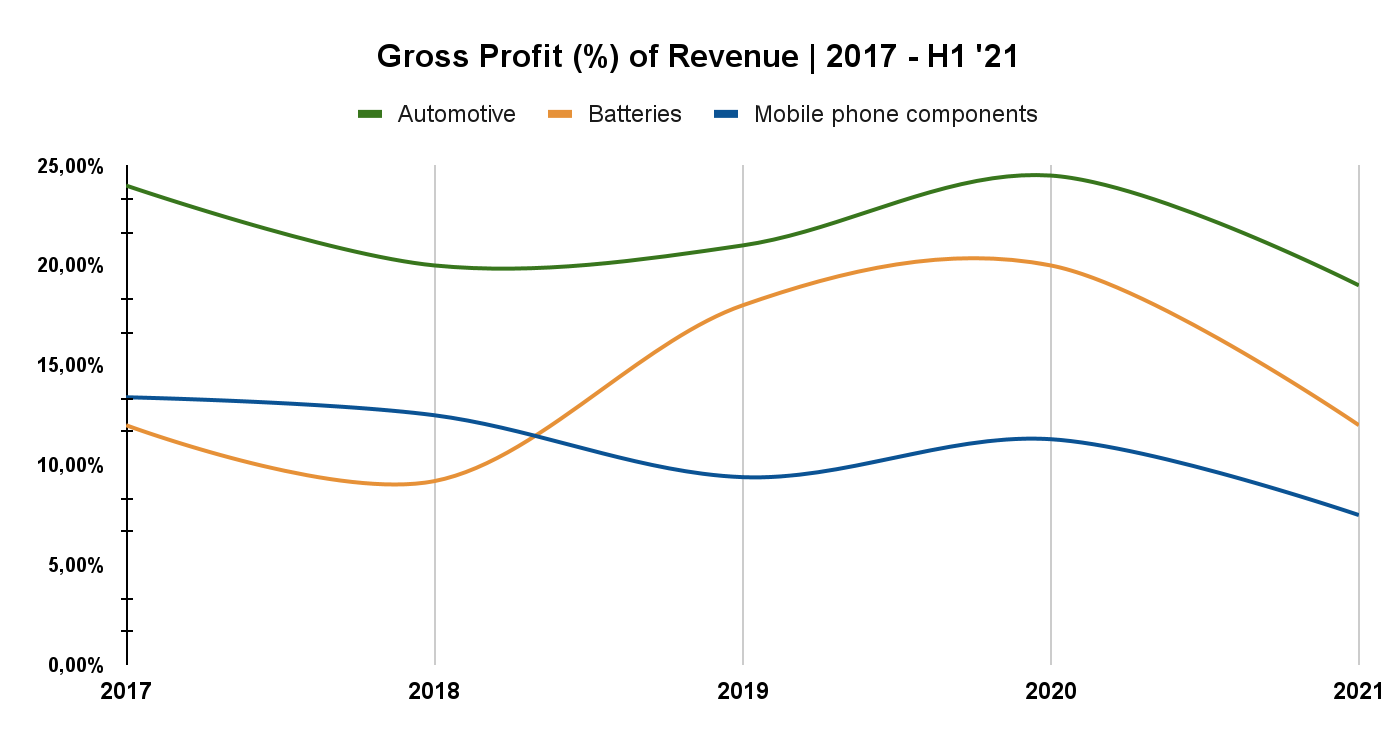 Despite the decline in profits, BYD still maintains considerable sales 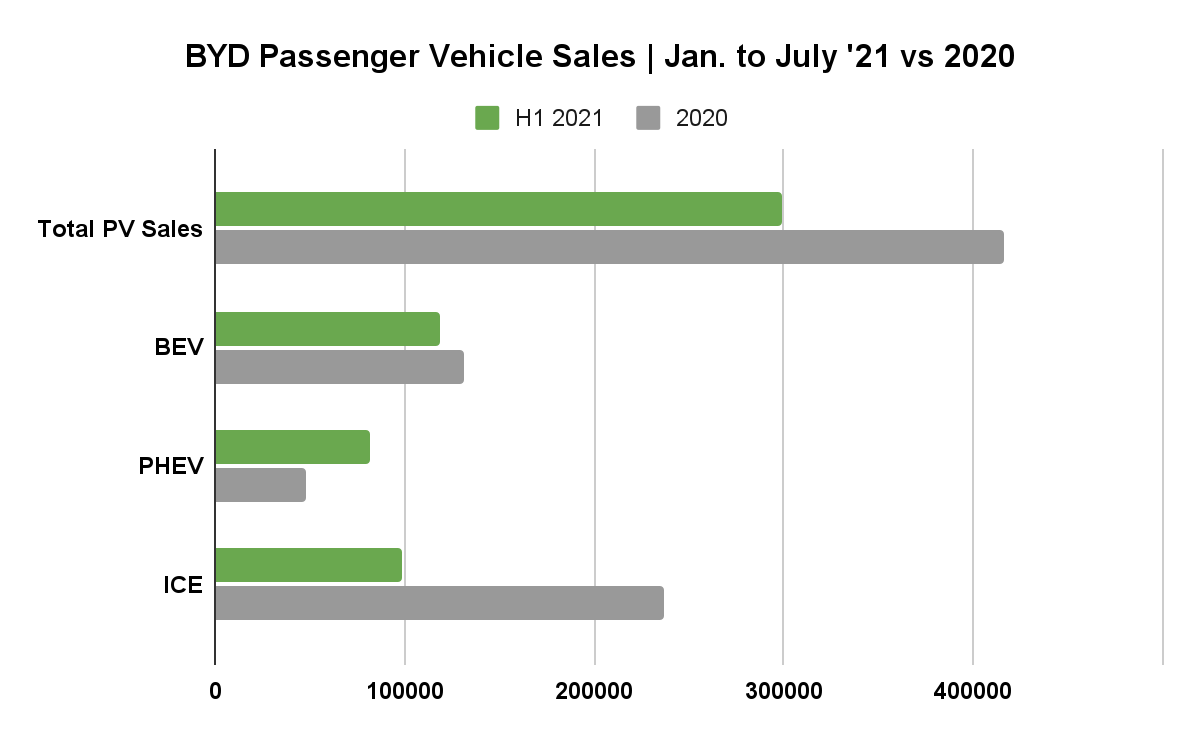 In July ’21, the company sold 50,500 new energy vehicles, +234% year-on-year and +22% month-on-month; among them the company sold 25,500 BEVs (+139% year-on-year) and 25,000 plug-in hybrid vehicles (+651% y-y). In July ’21, BYD ranked first among NEV manufacturers; regarding the first seventh months of 2021, BYD ranked third in terms of NEV sales behind SAIC-GM-Wuling joint venture and Tesla. Maintaining stability, the sales of DM-i series hybrid models began to climb, as the company continues to increase its production capacity to meet market demand.

At the Shanghai Auto Show, the company has launched the e-platform 3.0, and recently released the pure electric vehicles “Dolphin” and Yuan Plus based on this platform. Based on the electronic and electrical architecture of the self-developed vehicle operating system BYD OS, the company has stated that its electric vehicles will be able to achieve more powerful autonomous driving capabilities.

The Group leverages on its self-developed technologies, eg. the “blade battery” and the super hybrid DM-i platform, to promote comprehensive electrification of its entire automotive business.

BYD’s Blade Battery uses lithium iron phosphate (LFP) for the cathode material. According to BYD, this battery technology offers a higher level of safety than conventional lithium-ion batteries, with outstanding strength, range, long life, and power. The BYD Han, a model that established itself in the mid-to-large luxury electric sedan market in China, was the first BYD model equipped with the Blade Battery; the BYD Tang SUV was the first car powered by BYD’s latest battery technology for the Norwegian market.

How carmakers are developing and executing their strategies to better position themselves in the new era of electrified mobility?

Semiconductor spin-off and listing was suspended; current valuation and future profitability are questionable

Since its establishment, BYD Semiconductor has focused on automotive-grade semiconductors and simultaneously promoted the development of the semiconductor business in other fields of industry, including home appliances, photovoltaics, and consumer electronics. At present, the subsidiary offers a variety of products including infotainment systems, vehicle heat management systems, security systems, driver assistance systems, hands-free systems, automotive wiring, and more.

In 2020, BYD Semiconductor completed two rounds of strategic financing supported by several well-known investment institutions. After two rounds of financing, BYD Semiconductor’s post-investment valuation reached $1.6 billion. However, in contrast to the high valuation, BYD Semiconductor’s financial data is not encouraging. From 2018 to 2020, the company’s revenue was $201 million, $165 million, and $217 million, respectively. The net profit attributable to the parent company in the same period was $16 million, $13 million, and $9 million, respectively; net assets at the end of last year were $465 million, and net profit has been declining continuously in the past 2 years.

The spin-off and listing of BYD Semiconductor, which has attracted much attention from the market, has raised uncertainties. In early August, BYD Semiconductor’s IPO review was in a “suspended” state, after the mainland regulator launched an investigation into the law firm advising on the deal. It is still unknown when the company’s “suspended” listing will resume. In May, the Group announced that it would list its 70% owned chip-making unit BYD Semiconductor on ChiNext, a Nasdaq-like tech board, to raise $414 million.

The “do it all by yourself” approach adopted by BYD regarding NEVs, may be insufficient in the intelligent autonomous driving era.

In terms of automotive intellectualization and smart mobility, the Group has established a number of strategic partnerships with domestic and foreign players; including Huawei, Didi, AutoX, Daimler, and Horizon Robotics. The company has also completed a series of investments to further develop its in-depth technology innovation.

BYD has ambitions to offer Lv.4 autonomous driving by 2025; yet has a relatively low Lv.2 penetration

As for 2021, 60% of BYD’s models are equipped with integrated ACC and ICC (intelligent pilot system); nearly 40% of these models are also equipped with TJA. Low-speed AEB with pedestrian protection system is provided in 63% of the company’s models; in addition, only 33% of models can provide Lv.1 parking functions.

Among BYD’s models, only the Han EV is capable of achieving Lv.2 parking through APA full-scene automated parking system; one of the key features of DiPilot. In terms of sales, the penetration rate of Lv.2 equipped vehicles in total group sales is significantly below 30%. The company’s vehicles equipped with Lv.2 parking functions count for only a minor proportion of BYD total vehicle sales.

Read our reports to understand how leading carmakers are developing and executing their strategies to better position themselves in the new era of electrified, connected and shared mobility.

“Software On Wheels” To Reshape The Automotive Industry’s Future: It’s Now Or Never