The Norwegian Institute of Transport Economics (TØI) estimates that by 2050 transport demand is expected to grow significantly for both passenger and freight transport. Among the modes of transportation, the share of car transport is showing the highest growth rate, a trend linked to increased car ownership. 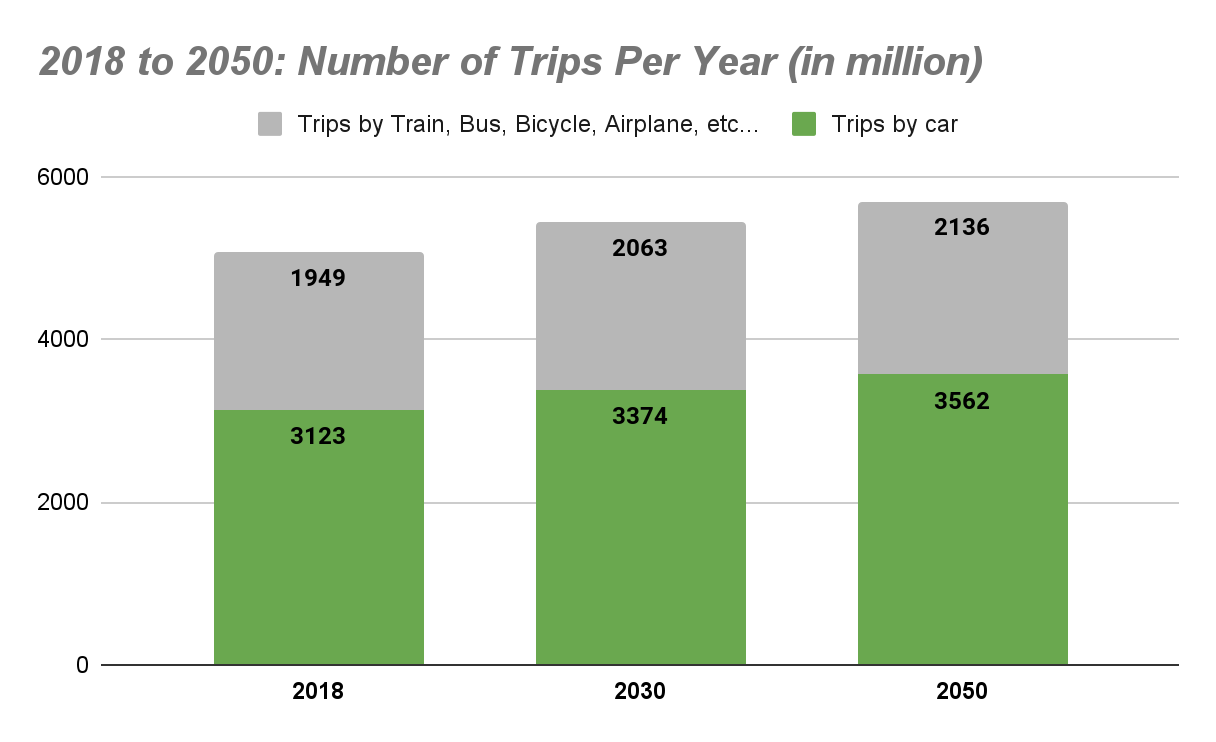 At the same time, Norway aims to at least halve greenhouse gas emissions by 2030

Norway has the ambition to be virtually emission-free by 2050, which means that the emissions should be reduced by 90 to 95%, compared to the current levels. According to the Norwegian statistics bureau (SSB), the transport sector counts for almost 1/3 of Norwegian greenhouse gas emissions; whereas over half of the transport sector’ emissions comes from road traffic.

Electrification is expected to be the most important measure in order to reduce greenhouse gas emissions from passenger cars, vans and heavy transport. By 2030, it is expected that battery electric vehicles in Norway will fully penetrate almost all road transport modes.

To reduce the number of car journeys, MaaS has a key role to play

As an alternative to private car ownership, car sharing has been recently identified by Norwegian authorities as an important tool for transport policy goals. Car-sharing is often chosen by members for financial and practical reasons, yet there are positive environmental outcomes as well.

TOI has estimated that one shared car can replace approximately ten privately owned cars; thus car-sharing is able to confront issues related to congestion, parking, noise and CO2 emissions. Additionally, if the car-sharing fleet consists of electric vehicles, it is likely that positive results,  such as those described above, will be even more substantial, given that power is generated from non-CO2 emitting sources; a scheme that is plausible in Norway, given the available hydropower.

In Oct.2020, Trondheim municipality issued regulatory guidelines that permit private car-sharing enterprises to participate in a joint car-sharing council that advises the authorities on where the enterprises need to establish permanent parking spaces; which car-sharing enterprises should be allowed to dispose of the specific parking spaces, and other matters concerning the allocation scheme of a parking permit for car-sharing business. According to the relevant announcement, the purpose of the issued regulations is to facilitate the increased use of car sharing in Trondheim municipality.

From 2015 and onwards, development in car-sharing business, is characterized by the rapid emergence of P2P services and the expansion of the geographical scope for car sharing

In 2015, two non-commercial companies Nabobil and GoMore were established in Norway. These two companies were the first to offer formal P2P car-sharing platforms on a large scale, where members rent out their private cars to other members. In such a business model, Nabobil and GoMore, are seen as facilitators for car-sharing, while it is the owner of the car who is technically the provider. P2P car sharing can be quickly scaled up both geographically and in terms of the size of the car fleet. After five years in operation, Nabobil has more than 180,000 registered users and 7,000 vehicles distributed in over 200 municipalities in Norway.

An important feature of car-sharing’ business in Norway is the development of hybrid business models that include combinations of P2P, B2B, B2C and cooperative forms.

Hyre, which is owned by Møller Mobility Group, is an example of one car-sharing player operating with a hybrid model that combines elements of P2P and B2P. Hayk is also a newly started company (established in 2018) that also follow a hybrid car-sharing model, offering services to cooperatives and co-owners, as well as P2P services.

In 2007, Move About was established as the second commercial “pure-electric” car-sharing operator in Norway. Move About offers pools with electric cars, electric bikes and electric scooters; and currently operates in Oslo, Fredrikstad, Halden, Bø and Trondheim.

In 2018, Norwegian State Railways (NSB) in partnership with the Danish company GreenMobility, launched a free-flowing car-sharing platform in Oslo. The platform includes 250 electric cars which can be parked for free (with some exceptions) in all public car parks within the Ring 3 in Oslo. Users can either pay for the use per minute or day, or they can buy a monthly subscription that provides 20 hours of access/driving during the period.

In Norway, it is carmakers and car-importers who have invested the most in car sharing business

The car importer Møller Mobility Group is behind the Hyre car-sharing company; whereas Bertel O. Steen, Norway’s leading retail provider has backed Otto Mobility; and these are still just a few of the car-sharing services available in Norway, with players such as Nabobil being acquired by international P2P provider Getaround in 2019.

Recently, Toyota and Bilkollektivet have joined forces in a new company called Godtur Innovation, which offers a platform where Toyota’s corporate customers and Bilkollektivet’s retail customers will be able to interact with one another, share their vehicles and rent their parking spaces. Furthermore, Toyota has also started pilots on car subscriptions on a monthly basis in Norway; while a number of other car brands, such as Volvo Cars and Seat, have already launched similar offers in the Norwegian market.

TØI estimates that by 2025, over 300,000 Norwegians are expected to use online car-sharing services.

Statistics from TØI show that a total of 250,000 Norwegians are now registered in a car collective and that more than 100,000 have used the service on a regular basis. According to TØI estimations by 2025, over 350,000 Norwegians are expected to use car-sharing services.

To learn about Carmakers’ strategies, market positioning and leadership in MaaS read our report “Carmakers’ Competitiveness in Smart Mobility“