In 2020, the Electrically-Chargeable Vehicle segment (i.e. BEVs, PHEVs and FCVs) significantly increased its market share against the backdrop of an overall decline in new passenger vehicle registrations, due to the COVID-19 outbreak. EVs accounted for approximately 10.5% of new vehicle registrations in 2020, according to the European Automobile Manufacturers Association (ACEA),

At present, approximately most EV charging takes place at EV’s owner’s homes or in private company parking lots; over time, however, the proportion of public charging infrastructure —at public parking spaces, stations and highways —will balloon, as home charging needs have to be complemented by charging stations on the route to support EV charging on the go.

In countries like China, where there are a few areas with single-family houses compared to highly dense urban residences and facilities, public charging infrastructure is expected to dominate over time with availabilities at on-street and commercial parking spots. In contrast, many families in Europe and the United States live in single-family houses, have sufficient parking spaces, and the construction of private piles is relatively convenient. Therefore, the demand for public charging infrastructure in these regions is weak, and the proportion of private charging points is relatively high. Nevertheless, with the rapid increase in the number of electric vehicles, the charging network, as a necessary infrastructure for the development of electric vehicles, is about to usher in rapid growth.

Public charging infrastructure network in Europe has continued to grow over the past years, with strong concentration in a few European countries.

The public charging infrastructure network is growing, but there are significant differences in deployment across the EU

The Netherlands leads in Europe with nearly 64,000 slow chargers (2,429 fast chargers); France and Germany follow with 45,751 and 44,699 cumulative public charging points respectively; whereas Finland, Iceland and Sweden, nearly doubled their stock of slow chargers in 2020.

According to data provided by EAFO, approximately 73% of publicly accessible recharging points in EU-27 plus UK, EFTA countries and Turkey, were located in five countries; i.e. the Netherlands, France, Germany, Norway and the UK.

Fast Chargers Deployment in the EU

Fast charging is an important factor in understanding the level of charging network coverage. According to the European Alternative Fuels Observatory (EAFO), fast chargers in Europe are being deployed at a higher pace than slow ones. As of 2020, there were more than 37,000 public fast chargers, up 56% from the previous year (2019: 24,188 fast chargers), including nearly 7,456 fast charging points in Germany, 6,248 in the UK, 3,751 in France and 2,429 in the Netherlands. For public charging network in Europe, the current ratio is roughly 6 slow charging stations for every fast-charging station 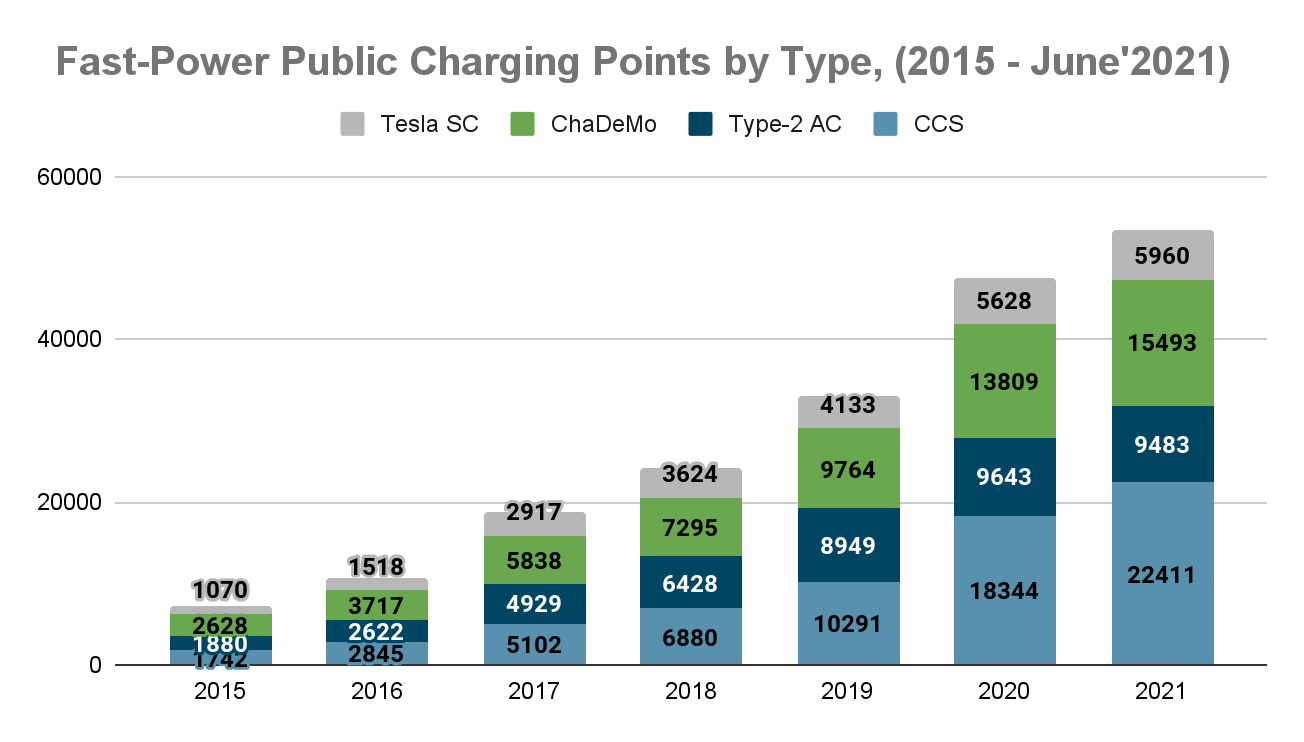 In the European Union, the average public EVSE (Electric Vehicle Supply Equipment) per EV ratio was roughly 0.09 at the end of 2020. Furthermore, the European countries with the highest EV penetration rate, tend to have the lowest EVSE per EV ratios; e.g. Norway (0.04) and Denmark (0.05) are sparsely populated countries with many detached houses and private parking spaces, where EV owners can largely use private home charging instead of publicly accessible charging points.

In its 2017 action plan on alternative fuels infrastructure, the European Commission estimated that the number of publicly accessible charging points would have to increase from the 118,000 available at the time to 440,000 in 2020, and to about 2 million in 2025.

EVBox and NewMotion (Shell) have more EV charging stations than any other European network, although ChargePoint will likely have a larger role going forward.

The structural limitations of highly dense urban cities, which have larger proportions of on-street and large commercial garage parking, are the catalysts for increased public-charging demand. On the supply side, the charging industry chain involves upstream manufacturers of charging hardware equipment required for the construction and operation of charging stations, midstream charging points operators (CPOs); responsible for the construction and operation of charging outlets and charging stations, and downstream service providers; mainly web-maps providers, online car-hailing and MaaS operators.

In Europe, the availability of public charging stations varies significantly between member states and the payment systems are not harmonized, forcing drivers to use multiple subscriptions or payment methods to charge their cars. This fact triggers different types of companies to form an industrial ecosystem of constant competition in both charging equipment manufacturing and charging network expansion, mainly through roaming agreements.

Europe’s top charging infrastructure players, provide both the hardware (i.e., actual charging stations) and back-office services (such as payment and billing services) as a turnkey solution for customers who want to have charging stations installed; such as retailers, municipalities, and businesses. At the same time, EV drivers can pay for a subscription and get access to all publicly accessible stations connected to their roaming networks.

Regarding CPO’S growth, charging service fees are an important foundation, data services are a powerful supplement, and the effect of value-added services is gradually increasing.

At present, the sales of charging hardware (both AC/Level 2 and DC/Level 3) and the charging service fees are the main source of CPOs revenue. Nevertheless, with the continuous improvement of users’ demand for travel service quality, CPOs have begun to change their market roles from simple charging facilities operators to comprehensive energy service providers and travel service providers, promoting the organic integration of energy and transportation.