China, home to the world’s biggest automotive sector, is stepping up efforts to embrace transformation

The external economic shock set off by the pandemic has exposed the internal limitations and the weaknesses of the automotive industry, while, at the same time strengthening the ACES trends (i.e. Automated, Connected, Electric and Shared mobility) that were already underway.

Domestic innovation and infrastructure in connectivity, internet services, and AI, are striving to support Autonomous Driving, and Vehicle-to-Vehicle & Infrastructure communication.

According to McKinsey, China has the potential to become the world’s largest market for autonomous vehicles, generating as much as $1.1 trillion in revenue from autonomous mobility services by 2040.

Furthermore, BloombergNEF expects 90% of new passenger vehicle sales in 2030 to have ADAS features, either as optional or standard. It argues that the growing adoption of ADAS features today will play a determining role in developing the value chain for fully autonomous vehicles and increasing deployment of AVs, or robotaxis, in the 2030s.

Due to the rise of ADAS and autonomous driving technologies, the demand for computing and data processing capabilities has skyrocketed, intensifying the competition in various development fields, such as high computing automotive chips, cloud computing platforms, Lidar technologies, embedded software solutions etc.

High-tech manufacturing is heating up in China

Considering more than 60 financing events that took place in the first 7 months of the year, we notice that a significant portion of VC investment in the automotive supply chain was directed to China-based firms (mainly start-ups) focused on electric vehicle manufacturing, automotive semiconductors, AD/ADAS technologies (including lidar and lidar-based perception solutions), and robotaxis. 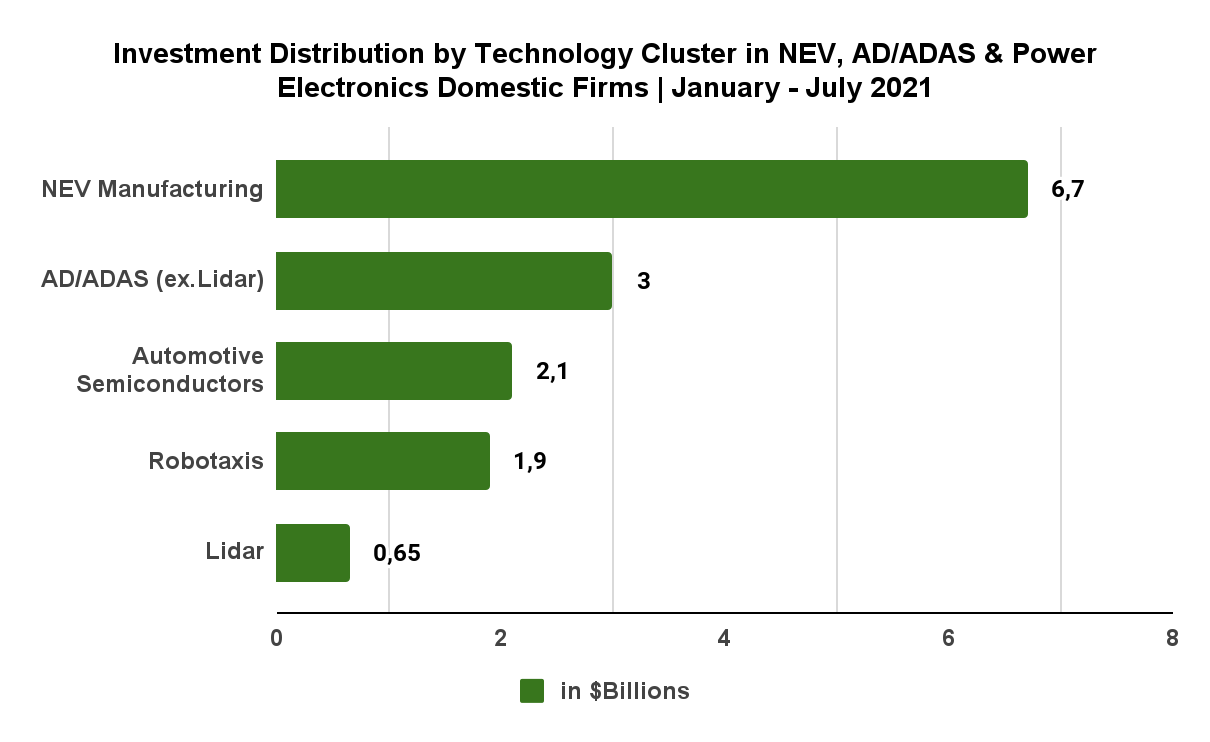 As cars get smarter, more cloud-connected and software-defined, power electronic chips have become a key component in products from sensors to control units. Internationally established companies like NXP Semiconductors, Renesas, Nvidia and Infineon are firmly dominating the automotive chip market; in form of revenues, the top 6 automotive chip suppliers accounted for nearly 50% of the global automotive chip market share, in 2020.

Especially in semiconductor segments that involve back end manufacturing and fabless design, the market share of Chinese companies has risen substantially in the previous years,  mainly via companies like HiSilicon, the semiconductor subsidiary of Huawei. Chinese semiconductor developers can strengthen their competitiveness in these specific segments; as these processes are, in general, less technically challenging, more labour-intensive, and highly compatible with end-customer applications, of which Chinese OEMs develop many.

Furthermore, the ongoing global shortage of automotive chips is bringing China’s carmakers and chip manufacturers closer together than ever before. At present, the market share of domestic automotive manufacturers continues to rise; 2021 will see leading Chinese carmakers shifting to mass deployment of Level-3 Conditional Automation in driving and parking features. Yet, domestic carmakers haven’t been able to avoid the chip crisis, mainly because they import a vast percentage of their chips.

Chinese carmakers are now seizing the opportunity to set up a larger domestic chip production base; under this context, chips are among the major investment hotspots this year, as the Chinese semiconductor companies are racking up large funding in order to meet existing needs and offer alternatives to advanced western chipsets.

Horizon Robotics, a five-year-old unicorn specializing in AI robotic chips for autonomous vehicles, raised in June ‘21, a Series C financing round worth $1.5 billion: Investors include Intel Capital, Hillhouse Capital, and Yunfeng Capital, among others. Founded in 2015, Horizon Robotics develops AI semiconductors for MaaS, in-cabin applications and autonomous driving. Horizon plans for a $1 billion IPO in New York that could be completed by the end of 2021. The company has established strategic partnerships with SAIC, GWM and GAC, Continental and Audi, among others.

SiEngine, co-funded by Geely Group and Arm China, aims to produce the “silicon brains” of a new generation of automobile digital cockpit, navigation and infotainment systems. SiEngine’s 7nm chips are designed specifically for automobiles, and competing with those provided by big players like Qualcomm, Nvidia, and Samsung. SiEngine plans to release its first autonomous driving chip, the AD1000, by 2024. It will be able to power Level 3+ autonomous driving.

Baidu’s AI chip unit Kunlun, has recently completed a round of fundraising, valuing its business at approximately $2 billion. The financial round was led by CITIC Private Equity Funds Management, IDG Capital, and Legend Capital. Kunlun’s integrated circuits are currently used by Baidu’s smart electric vehicles under Jidu Auto, and cloud computing. Earlier this year, Kunlun was formed as an independent company.

SenseTime, the Chinese artificial intelligence (AI) start-up, unveiled the full product portfolio of its new intelligent automobile brand SenseAuto during the 2021 World Artificial Intelligence Conference (WAIC). SenseTime has developed a comprehensive product under the SenseAuto brand, consisting of the SenseAuto Cabin, the SenseAuto Pilot smart driving product and the SenseAuto Connect Cloud platform. SenseTime, founded in 2014, has raised more than $3.0 billion from investors including SoftBank, Alibaba, Qualcomm, Hopu Investment Management and Fidelity International; and has established partnerships with more than 30 domestic and foreign OEMs, including Daimler and WM Motor. According to recent media reports, the company has revived plans for an initial public offering in Hong Kong that could raise as much as $2 billion.

The growth of automobile production and sales in China, particularly in the realm of New Energy Vehicles (or NEVs), has been nothing short of explosive; the rapid development of electric vehicles has attracted many new car manufacturers as well as tech-giants to enter the game.

After domestic car manufacturers such as NIO, Ideal, and Xiaopeng have established a firm foothold in the market, in 2021, several technology companies are coming in fiercely. ICT companies not only invest heavily in new energy vehicle start-ups, but also make technical efforts to promote the integrated development of new energy vehicles and intelligent networked vehicles.

Chinese NEV startup Leapmotor has raised approximately $1.35 billion so far in 2021: the Hangzhou-based company announced earlier this month that it has raised $694 million for its ongoing Series B round led by China Capital Investment Group. The company had already raised about $664 million led by Hefei municipal government, SDIC Chuangy and others, earlier this year. Leapmotor plans to produce 800,000 NEVs by 2025 and is expected to go public at the end of 2021 or in early 2022.

Evergrande New Energy Vehicle Ltd has raised $3.4 billion by bringing in six new investors: Evergrande Auto has issued a total of 952 million new shares to six investors, attracting approximately $3.4 billion to fund technology research and repay debts. The company has been struggling to repay debts and is facing Beijing’s new debt-ratio caps to tackle excessive borrowing from the market. Until March’21, Evergrande Auto had invested more than $7 billion in the new energy vehicle business; while the investment regarding autonomous driving and connected technologies had exceeded $3.5 billion. According to Reuters, Evergrande Group is currently in talks with a consortium led by Xiaomi to sell EV unit stake-sources.

Chinese internet security company Qihoo 360 is leading series D financing into EV startup Hozon Auto: Hozon Auto, a pure electric vehicle start-up, has raised a total of $463 million in series D financing, led by the Qihoo 360 Security, China’s largest provider of internet and mobile security products. According to Qihoo’s CEO, 360 will help Hozon Auto in terms of software and AI technology, marketing concepts, financing, and IPO paths. Hozon Auto has sold over 35,000 of its two-car models, the Nezha V, and the Nezha U Pro; and since 2018, has raised approximately $1 billion in financing.

Hesai Technology, a developer of cutting-edge 3D laser sensing technologies, has recently completed a $300 million Series D financing, led by Hillhouse, Xiaomi, and Meituan. According to the company, this round of financing will be used to support the large-scale mass production delivery of hybrid solid-state lidars. Meanwhile, the company has strengthened its strategic cooperations with Didi Autonomous Driving and Baidu Apollo: Didi Autonomous Driving has officially became the first domestic autonomous driving company to use Hesai’s latest high-level lidar sensor; whereas Baidu Apollo plans to deploy Hesai’s new architecture lidar on the fifth generation of its fully driverless shared unmanned vehicles.

To accelerate the R&D and production of NIO ET7, lidar developer Innovusion received $130 million in financing. Innovusion announced that it received $66 million in Series B+ financing in August and $64 million in Series B financing in May, which means that the total amount of Innovusion’s Series B financing has reached $130 million so far. The funds will be mainly used to support the mass production and delivery of the ET7 lidar of the NIO smart flagship sedan for front-loading and mass production, as well as Innovusion’s continuous attention and investment in technological self-research and innovation projects. Innovusion has also established a strategic partnership with Baidu Apollo; its image-level long-range lidar has been successfully deployed in Baidu’s Apollo intelligent transportation city projects in Beijing, Changsha and Hebei.

ZongmuTech, a Shanghai-based provider of autonomous driving technologies, including cameras, millimeter-wave radar, and ultrasonic sensors; completed a cumulative $190 million Series D round of funding in June; with investors including Denso, Xiaomi and Qualcomm. The company has strategic collaborations with major Chinese automakers, including Changan Automobile, Geely, and FAW Group; in addition, ZongmuTech, is the first company Xiaomi has invested in after announcing its willingness to build its own cars.

LiDAR is a key technology for autonomous driving, object recognition and accident prevention that major OEMs and Tier 1s are relying on to achieve L3/4 automation. Leading manufacturers of the cameras, radars, Lidar and ultrasonic sensors used for ADAS are stepping up their efforts to benefit from the uptake of ADAS penetration and the eventual transition towards semi-autonomous and self-driving cars.

WeRide, a China-based developer of Level 4 autonomous vehicles, raised more than $600 million in the past 5 months. The company raised $310 million in its latest round of funding which concluded in June ‘21. In total, WeRide has raised more than $600 million in the past five months, bringing its valuation to $3.3 billion. The Series C round was led by Alliance Ventures, a strategic venture capital fund operated by Renault-Nissan-Mitsubishi; following Nissan’s strategy to develop L4 autonomous driving technology in China. WeRide launched its first robotaxi service in November 2019 in Guangzhou, covering an area of 144 square kilometers. Since June ‘20, WeRide’s robotaxi service became available to the public through Amap, a popular ride-hailing mobile app in China with 140 million monthly active users. In April ‘21, WeRide obtained the California DMV driverless test license, becoming the first start-up company to have driverless road test licenses in both China and the US.

Didi pumps capital into its autonomous driving arm: in June ‘21, DiDi Autonomous Driving has completed a new round of financing of over $300 million; bringing its total funding in 2021 to more than $600 million.  The latest round of financing includes $200 million from Guangzhou Automobile Group (GAC), following the announcement of DiDi’s partnership with GAC Aion. In June 2020, DiDi Autonomous Driving launched an on-demand robotaxi service in Shanghai. In March 2021, the company announced a strategic partnership with the Huadu District of Guangzhou, China, to invest in self-driving R&D and commercial applications.

The race for driverless robotaxis is heating up in China, as regulators began allowing limited robotaxi trials in 2019, and this January, the Ministry of Industry and Information Technology released a draft policy permitting AV testing on highways with a goal of opening the robotaxi market by 2025.

Baidu has announced plans to deploy 3,000 robotaxis in 30 Chinese cities by the end of 2023; Pony AI has raised a total of over $367 million earlier this year; and AutoX, which has recently took the wraps off its its “Gen5” self-driving system powered by Nvidia, launched a commercial robotaxi system in Shenzhen, China, becoming one of the first autonomous driving companies in the world to provide full self-driving mobility services with no safety driver behind the wheel.

Read our reports to understand the strategies of major Suppliers and Carmakers in ADAS sensors, AD platforms as well as collaborations. Our reports also provide an in-depth analysis of how the regulatory framework affects the OEM strategy for Level 3 deployment.

Share this on:
ChinaInvestmentsMobility Ecosystem
Previous post
Tesla Outplay Rivals in Charging Its Electric Fleet, Deal With It!
Next post
Can BYD support the growth of its multi-billion market value? 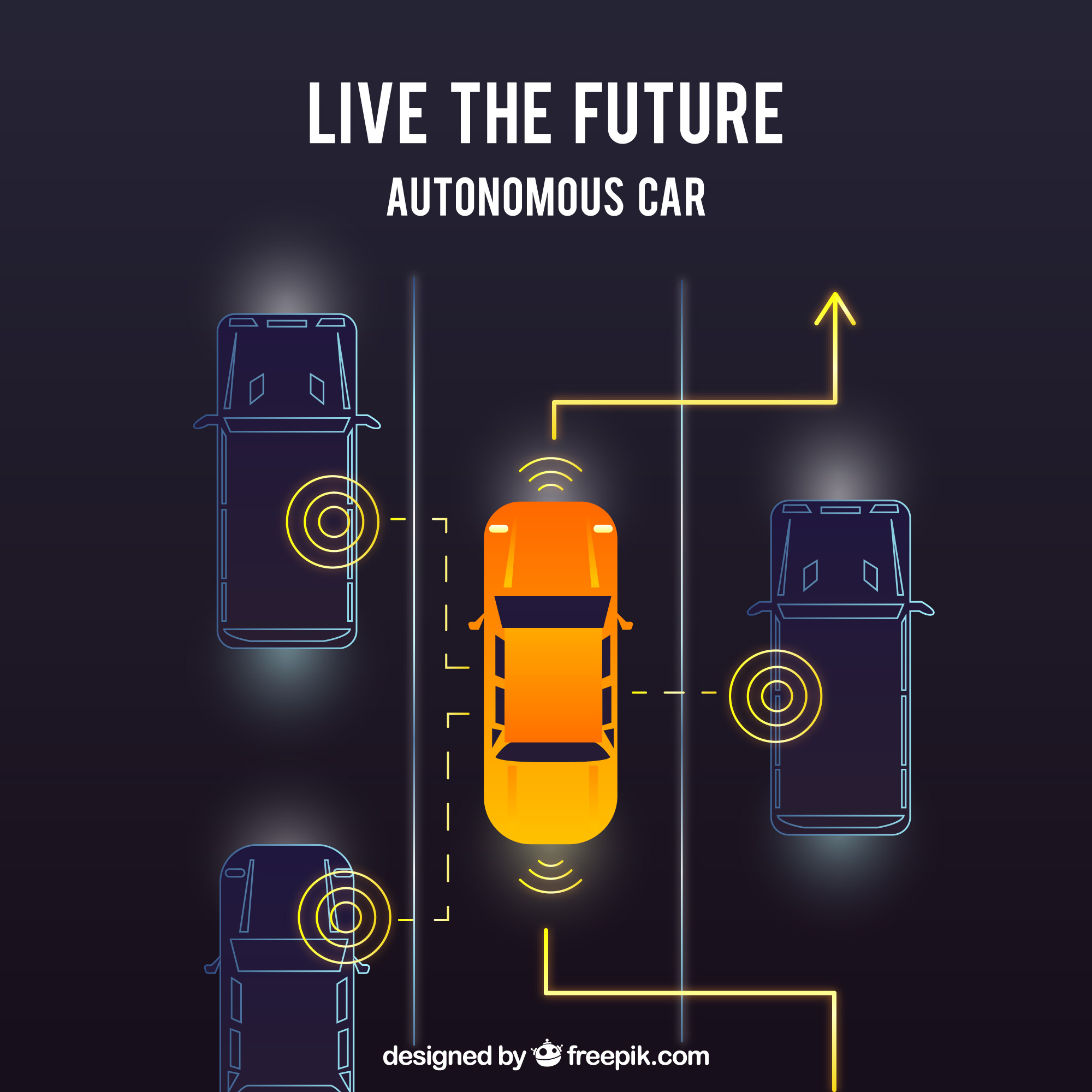